Having a faster version of the PC you had is definitely what you always want. Some people might not prefer changing the whole system just for the sake of speed. The speed can be achieved by addition of little things to your system. Optane memory is utilizing the first new class of NAND. It is a PC-caching solution the works with Intel’s new 7th generation Intel Core processors and systems that support it. It comes in two modules, 16GB and 32GB which is packed in M.2 SSD. Intel is pretty confident about the speed boost and increased system performance through the addition of the Optane memory to the system. When paired with its software, as claimed, we can see up to 28 percent faster overall system performance, 14x hard drive access and 2x the task responsiveness. It is basically built to accelerate the usage of the large capacity HDDs through caching. With the look at some intel optane memory pros and cons, it will be quite clear if it is something to be excited of or not.

Basically, the enthusiasts and power users will not be benefited to a great deal from Optane memory. They probably already have their system build upon the SSD memory or have the comb ination running. The Optane memory being an M.2 SSD, it might not make that very sense in such conditions.

Pros and Cons of Optane Memory

Everything has two sides to it, surely Optane Memory too has a pro and con side to it. 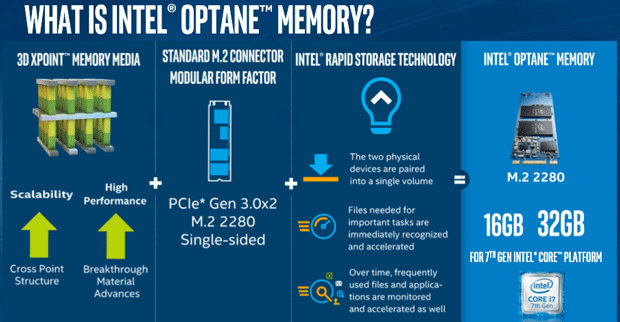 On the concluding note, Intel Optane Memory are still on the developing phase. No one knows, it might overthrow the SSD game if certain changes are made. The use of optane memory for caching lets you access the system quickly throughout your usage. Newer things cost more, so don’t worry about the price at the moment, it will gradually go down with time. These are few of the intel optane memory pros and cons.